As school winds down in the Spring, young Christians in high school face a question unique to this period in life: “Should I go to the prom?” Non-Christian kids may be wondering if they can get a date or afford the costs of this expensive night. Some kids aren’t interested in anything associated with the prom. However, young Christians often face  several choices that their non-Christian friends do not have to deal with:

The answer to the last question is easy. As Colossians 3:17 tells us, the authority of Jesus should guide our life. We are an example to others and must dress and act in ways that glorify God and do not lead others into sin. The reason that dances in general and the prom in particular become an issue is the activity that takes place at these events and often surrounds them and the clothes (or lack of) that are worn. A broader issue should also be considered: am I concerned more about enjoying worldly entertainment and approval than keeping myself unstained by the world (James 1:27)?

I have found two very good articles that any young person (and their parent) should read and consider before deciding to go to dances and the prom:

Though you didn’t ask, my decision was not to attend. I knew my mother and many godly people that I esteemed would not approve of a decision to attend. If I went it would most likely be with someone who did not embrace the standards of modesty that I did which would be embarrassing and tempting. In addition, I knew a lot of my friends were going to use the night as a pretense to let many inhibitions go (they were talking about it for weeks before the prom). I did not want to be associated with any of that and had no interest in attending. I didn’t wrestle with it, that I recall, since nothing associated with the prom interested me.

For our kids, my wife and I decided before we had them that it would not be a part of their lives. We don’t anguish over the decision because the “no” is our final answer. We approach it from the perspective of adults that have lived longer and seen more than they have seen. In addition, we have worked to provide wholesome alternatives for them such as a banquet at a nice location with a lot of their friends where they can dress modestly, have a nice dinner, take photographs, and have a memorable evening in a morally positive atmosphere. We are firm believers that if you say “no” you need to provide a good alternative that they can enjoy.

As with all of your decisions prayerfully ask yourself whether choosing an action will glorify God or hinder your ability to shine your light.

In a previous article, 5 Warning Signs in a Dating Relationship, I highlighted the warning signs one should look for when dating someone that indicate problems that will make a long-term relationship, especially marriage, difficult. There are also some positive signs that the person you are dating is worth investigating further and perhaps marrying one day.

What are some other positive signs to look for in the person you are dating that point to a strong long-term relationship?

Car manufacturers install warning lights to alert us when sensors are picking up unusual or dangerous signals from the car that indicate mechanical problems, failure, or potential danger. When dating there are also indicators that signal potential problems in relationships that the wise young person will look out for. You certainly do not want to marry someone who is demonstrating behaviors that will be worse in a lifetime committed relationship.

Dating provides a great opportunity to learn about another person. Use the time to develop the friendship and understanding of the person. Pray to God for wisdom and discernment in your relationship so that you find the person who will help you go to heaven. Don’t rush the relationship (see the article Don’t Awaken Love Until It Pleases) and watch for the signs of strength and weakness that you will have to live with if you marry the person. 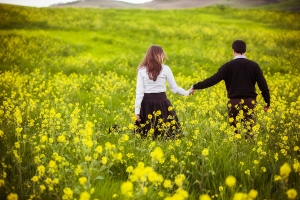 The most profound advice for romantic relationships is found several times in the Song of Solomon. The phrase “do not awaken love until it pleases” is used within the Song as an encouragement to others and a reminder to be patient in one’s own relationship. What does this phrase mean?

Love can be compared to a lovely flower that blooms beautiful in its proper season. No amount of sunlight, water, or nutrients can force the flower to bloom before its time. Attempts to physically force the flower from the bud will only damage or destroy it. However, if you provide the nutrients and proper environment the flower will bloom beautifully on its own and often at an unexpected, unobserved time.

Consider some common mistakes in failing to “awaken love until it pleases:”

True love is more beautiful than any flower but it must be allowed to grow and bloom in its own time. “Do not awaken love until it pleases.” Be patient and enjoy the friendship until the love blooms then take care of it like a precious tender plant.