I saw a commercial the other day regarding the sale of AARP Medicare Supplement plans.  An older, “well preserved” female is shown walking down a beautifully landscaped path toward the camera, smiling and looking quite alive.  After a moment she stops, looks at the camera and says “I’m only in my 60’s – I’ve got a long life ahead of me – big plans.”   And I suddenly found myself wondering if I actually, correctly heard what she said.

Even if she was Japanese, the race of people who currently have the highest average life expectancy in the world (80 years old), at best she would have 12 to 15 years left to live.

Sure, she may live to be 95, which would give her approximately 30 years left to live, but statistically she only has an 18% chance of doing that.  The odds are definitely not in her favor!

Now I don’t know about you, but if you told me I had another 9 to 15 years to live, I don’t think I would consider that a “long life ahead of me” –  and I’m not sure that’s even enough time to consider making “big plans” either.

Isn’t it sad how our society can so easily ignore things they don’t want to hear or that makes them feel uncomfortable?  Ignore solid facts and figures about death?  Or even make up “truth” of their own?

Most of us here know what the Bible says about the length of our life – in fact, the Bible mentions the human being’s “average” life span.  Moses wrote in the 90th Psalm “The days of our lives are SEVENTY years; and if by reason of strength they are 80 years, yet their boast is only labor and sorrow, for it is soon cut off and we fly away.”  Apparently the eagerness to sell AARP products and make money overrides everything the Bible says about the matter, but that’s not unusual – so many in the world simply ignore what God’s word says.

But I did a spur of the moment test that in a way was shocking (but in a way not at all) and simply shows the wisdom and the accuracy of the Bible.  The test and the parameters were as random as they could be and I actually had most of this invitation written before I even did it. 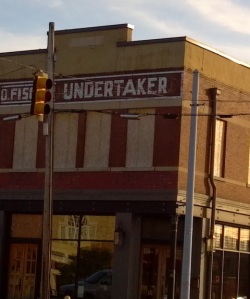 We had purchased a past Sunday Birmingham News and in the obituary column there were 27 people listed that had recently passed away.  I wrote down all their ages (the oldest was 98, the youngest died at 41), totaled them and then divided by 27. Guess how long their average lifespan totaled?  SEVENTY (.6) YEARS OLD!!  Almost exactly what Moses, an inspired writer, recorded as Scripture – and the world chooses to ignore the Bible, claiming it is a “fairy tale”.

So, going back to our commercial – if our mid 60’s woman lives an average American life span of 77 years – does 10-12 years REALLY sound like “a long life ahead of me?!”  Think back 10 years of your life – does it seem like ages ago, or yesterday?  If you have a 10 year old, has life just slowed down like molasses in winter since they were born???

Well, back to the obituary – what about young people, teenagers?  I mean, the youngest person in the obituary column was still 41.  If you’re a teenager, should you worry about dying?   Let’s let the numbers testify.  In America, from 1996 to 2006, over 16,000 teenagers between 12 and 19 died EACH YEAR.  Each Year!  How do you think all of these teenagers died?  Did I include all those inner city kids who shoot each other every year?  Yes, they’re in there, but only 13% of the 16,000 teenagers died from homicide.  The next lowest percentage of deaths was by suicide, at 11% – that’s a terrible statistic and so sad.  But do you know what IS the leading killer of teenagers 12-19 years old?  Unintentional Injury.  What killed almost half of the 16,000 teenagers every year for 10 years?  Unintentional or Accidental Injury.

I don’t know about you, but what I see in these figures scares me.  First, it bothers me to think of 16,000 plus teenagers dying every year in America, having one myself in that age group.  Next, I look at the percentages of those killed by suicide and homicide and it begins to make me a little sick.  But then I see that almost half of all the teenagers 12-19 years old die from something that was an ACCIDENT!  Something that wasn’t planned!  Something they may never have seen coming….  What I’m trying to tell each of us, those of you who are young, and ESPECIALLY to those of you who are young and haven’t obeyed the Gospel, is that life is uncertain.  People die from doing everyday things – something went wrong, an accident happened and someone died, just like that.  No warning, no symptoms, no clue that you’re about to die – an accident happens and death occurs.

James says in James chapter 4:13-14     “Come now, you who say, “Today or tomorrow we will go to such and such a city, spend a year there, buy and sell, and make a profit”; whereas you do not know what will happen tomorrow.  For what is your life? It is even a vapor that appears for (how long??) a little time and then vanishes away.”

That’s true for babies, it’s true for teenagers, it’s true for grown people and it is true for EVERYBODY – we don’t have a very long time on this earth.  We’re born, we grow up, we die – most do, many don’t!  There are no guarantees – you may be in perfect health today and be gone tomorrow.

NOW – remember that half of the 16,000 teenagers 12-19 years old that died of Accidental Injury for 10 years in a row?  Do you know what killed 73% of that half?  “Motor vehicle traffic accidents”.

How many times have you heard “You could just be driving down the road and” – people usually say something a lot because it’s true.  And dedicating yourself to driving safely won’t guarantee you won’t be in an accident.  In fact, if you are young and don’t have your driver’s license, you aren’t even in control of the situation!  Someone ELSE is doing the driving!

You might be asking this – Am I saying all these things to try to scare teenagers into obeying the Gospel?  I’d have to say no – if anyone wants to be saved by hearing God’s word, believing it and in Him, repenting of all sins, confessing belief that Jesus to be the Son of God and being baptized into Christ to wash away sins, I want (or rather GOD wants) it to be because they’ve decided to give up their own will and follow God’s will, desiring whole-heartedly to live as the Bible teaches – and NOT because something scared them to do these things.

But shouldn’t these facts and figures cause a moment of serious thought?  Another statement people say often is “Numbers don’t lie” and true numbers don’t.  I’m praying that what has been said tonight will cause each one to take a minute, consider your soul’s standing before God right now, and if you haven’t obeyed the Gospel, make up your mind to do it right now.

It may be that someone reading this has obeyed the Gospel in the past but currently isn’t living the way God would want – doing something sinful on a regular basis because it’s enjoyable and counting (or rather GAMBLING) on the fact that good health and life will continue.

God wants us to give up our idols and give ourselves totally to Him – and repentance and confession of such acts are God’s method of restoring us, publicly if the sins have been committed publicly.

Don’t be like the person I noted when I was gathering these facts – on the same website showing all the ways people die, this person commented:

“Anyone with sense knows that if you get enough vitamins and a proper diet you don’t get sick!!!”

The world has so easily learned to deceive itself and believe anything that’s not true – God’s word is truth and says clearly that there is no promise of tomorrow.  This same truth also says “The wages of sin is death”.  On the other hand, God’s word also gives “exceedingly great and precious promises” of eternal life in Heaven where there is “no more death, nor sorrow, nor crying” and “God will wipe away every tear from their eyes”.   Decide to live for Him who died for you.