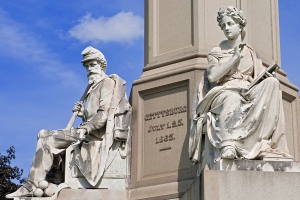 The final Monday of May is Memorial Day. For many it is a day of play and the symbolic beginning of summer. It is an extra day off, possibly with pay. For others it is time to go to the lake, beach, or BBQ in the backyard while enjoying the three-day weekend. The federal government originally instituted this holiday as a day of remembrance for soldiers who died in the Civil War. Today Americans honor the day to remember all who have died fighting for our nation. When we think about the sacrifice that men and women made for our country, it is hard to grasp the significance of what they gave and what we have received.

Perhaps we have trouble memorializing the war dead because they seem so far removed from us. The Civil War was fought so long ago that we can hardly relate to those soldiers. The wars of more recent times, the World Wars, Asian wars, and the Middle Eastern wars, were fought on foreign soil far from our homeland and for people that we do not know personally. Yet we must not forget the blood shed for our country.

Several years ago, CBS aired a special on D-Day commemorating the fiftieth anniversary of the Normandy invasion. The most moving moment came at the end in which the camera panned back from a ridge where the U.S. infantry spent their first night on French soil after the invasion. That spot is now the burial ground for over 4,000 soldiers who died to take Omaha Beach. My heart groaned when I saw endless rows of white crosses. From the air it looked like a small farm surrounded by cotton fields. Under each cross was a man who, fifty-nine years ago, stepped from an American ship into eternity, their bodies to rest under foreign soil. Because of these Americans, and many like them, we enjoy so many freedoms today. Memorial Day is a day to honor all of them. Sadly, many casually acknowledge their sacrifice. These young men, most in the prime of youth, never saw their dreams realized, never married or had children, did not develop a lifelong career, and did not retire and grow old with a beloved spouse. The documentary ended with these sobering words, “These men gave their tomorrows for our todays.”

As Americans, we owe a debt to these men. We have the responsibility to make our country the best it can be. Many people divide the country over ridiculous issues, become selfish and lazy with this country’s bountiful wealth, and make excuses for every failing. We should live lives worthy of the freedoms that they purchased with blood. We should live to fulfill their lives and give their deaths meaning. In a sense, we live their lives by living meaningful lives as so vividly expressed in the movie Saving Private Ryan.

When we soberly consider the sacrifice of our nations soldiers to defend the principle of freedeom illustrated by acres of white crosses, remember also the one cross that led to our spiritual freedom.

Adolph Hitler’s Third Reich was a fearsome enemy. The dark storm troopers who marched across Europe, the blitzkrieg attacks, and nightly bombing that decimated England struck fear into the hearts of all Europeans. However, when we consider the power of the prince of darkness and his hellish host, we face a more formidable army that has waged war against humanity for ages. We could not resist this enemy alone for Satan had the power of death and mankind was within his powerful grip, doomed to an eternity of pain suffering for yielding to him.

In this dark hour, Jesus invaded this world, empowered by God through the Holy Spirit, and took the battle to the devil. Demons cried out for mercy when Jesus confronted them. The devil retreated from each conflict with Jesus. He used various tactics, even killing the Savior, but could not gain the victory. Jesus rose from the dead, breaking the hold of death and crushing the head of Satan. The apostles died carrying the gospel of a risen savior to the world; they sacrificed to spread the word that even today can save us from the power of sin and death. When the oppressors killed the Christians, the message continued to spread. “Oh grave, where is thy victory? Oh death, where is thy sting?”

Sometimes we can enjoy freedom from the power of sin and the glory of the new life in Christ that we forget the cost paid to secure them. Jesus left the glory of heaven and suffered a terrible death so we could have these blessings. Before He died, He instituted a memorial, the Lord’s Supper, as a weekly reminder of His death. We must be careful not to let this special time become a meaningless ritual. We must make an effort to remember the blood shed for us. It was no small thing for Him to die on the cross to atone for our sins. Let us not be casual in our observance. Let us daily remember that He died to give us life and wants to live His life through us.